Heidi Hove, a Danish artist on a residency in San Telmo: "There's always something that surprises you here." 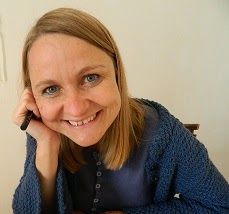 San Telmo is full of pleasant surprises. One of them is an art studio building at 1008 Defensa Street, where a young Danish artist, Heidi Hove, is working on a stop-motion video about a girl who sails away...Denmark seems to be a mysterious faraway place for most porteños, but Heidi is very enthhsiastic about her visit.

--What brought you to Argentina?

--I am on a residency which I heard about through some other Danish artists who told me they were very impressed by the city. So I thought it would be interesting to go to a place so different from Denmark and northern Europe. Walking around the streets of Buenos Aires I have discovered a city quite at odds with what I know.

--True. You can see more people walking the streets in Latin America than in the U.S. or Europe…

--Yes, because the populations in Latin America are much bigger, distances much longer, and the weather is also more suitable for year long out-door activities. Copenhagen is a big city in Scandinavia, but we only have a million and a half inhabitants including the suburbs and around 600,000 in downtown Copenhagen. Our summers are short and during that period you’ll find a lot of activities in the streets if the sun is out--but for the rest of the year people stay cozy inside. Also, Copenhagen is a bike city--most of the population commutes by bike-lanes, which is also very different from here. So, we are using the public space in different ways, and it has been fascinating to come here with my Nordic spectrum.

--What has impressed you most about San Telmo?

--The historic family houses and restaurants, the small specialist shops and markets, the old streets and the friendly people. What I really like about Buenos Aires is that you get surprised as you walk around. You can see a completely new building alongside a very old one, something colorful, something old grey and drab…there is always something that surprises you. That’s what I like about this place. It’s food for thought and it makes me more attentive to the details as I walk around in the city. I think that’s an important aspect of life also, that we pay attention to the details and we move our focus. It keeps things more alive. That relates to my job as an artist also. In my work I like to put another perspective on everyday things and routines and to arise some kind of confusion by the viewer. That could happen by displacement of things in the public space or to highlight an action or activity, which is normally not valued and paid attention to.

--Is this your first visit to Latin America?

--I’ve been to Mexico, that’s the only other Latin American country I have been to. I see some similarities between Buenos Aires and Mexico City, but there you’ll find even more activities on street level – especially a lot of great food stands. I think Buenos Aires is more European in that sense.

--You don’t see many people on the streets in Europe…

--Well, I think it’s a cultural thing. People seem more outgoing and expressive here. In Denmark, people are a bit more private. Here, it sometimes seems like the living room has moved to the public space, which I like. People talk a lot with each other and it looks more as if they were one big family. And you have your routines of going out to restaurants, something which is much more common here than in Copenhagen. In Denmark you usually don’t go out alone, as you do here. It is mostly if you have to meet someone and for other special occasions. It is also more expensive to go out in Denmark, so you usually cook at home and you invite people to your home instead. I like both ways of doing things have their charm.

--The coffee isn’t very good here but you can stay as long as you want at a café in Buenos Aires.

--Not to change the subject but I have read that Denmark is supposed to be the happiest country in the world. Is that true?

--Do people complain in Denmark?

--They probably say that Denmark is the happiest nation in the world, because we have a very good health care system and it’s safe to walk around on the streets, day and night and for women. I think it has to do with safety. If you’re unemployed you don’t have any difficulty getting unemployment benefits, also retirement is very good. Everything is very, very organized and that’s what contrasts so sharply with things here. There are systems here but they have leaks.

--It is difficult to get continuity here.

--But when you can get together to do things you get fantastic results here and that makes life dynamic. If nobody organizes things for you, you end up doing them yourself. Ex. I came from a very small academy located on an island in Denmark. We were only 50 students. And we realized that we couldn’t do it alone: you can’t make it as an artist by yourself. You have to have friends, a network. 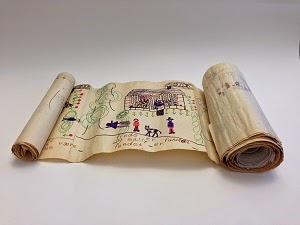 --What is your project here?

I am working on a story from my childhood. When I was around nine years old, back in the mid 1980's, I watched a children's TV puppet show called ‘Sally the Pirate’ (‘Sørøver Sally’ in Danish). It is about this pirate girl and her giraffe, which can go invisible if needed. She is kind of a rebellion and she also has her own ship. One day she meets a boy called Frede and his family, and in each part of the series we follow their adventures. So, when I was nine, I video recorded the series and with the help of the playback function, I draw selected scenes and chapters into a 10-meter long film roll. It is interesting for me to go back and look at this cartoon I did. Sally is free and she has her own ship that she can sail away in. In that sense, I am at the moment doing the same as her by travelling to the opposite side of the world. I have never been so far away from home before, but on the other hand, I am also a lot like Frede, who is stuck to his family roots and traditions and needs to get shaken a bit in the meeting with other…

--Has your stay here modified in any way your original plans?

--Yes. I brought this cartoon with me in my suitcase but I didn’t know what I was going to do with it – if anything, cause that could also have been the case. I have been very doubtful about this project and if I should just leave the story to my childhood. But I finally thought it had some potential and decided to re-construct some of the story through a silent stop-motion short film. Earlier, I have been working with linoleum cuts, but I came up with the idea to combine the lino cuts with wood-cuts made of a collection of old, Argentinian scrap wood from the wood workshop at the residency.

--The cartoon has to do with your own life?

--Well, I guess that a lot of people can relate to the activities, which are taking place in this family story. I prefer too keep it open for interpretation, and that is also one of the reasons why I have chosen to make it a silent, stop-motion movie, so you’ll have to fill out the missing parts yourself. But of course, I think that there’s something in this story that relates to my own life also – else, why would I draw this meter-long story as a child? Ex. the idyllic, rural settings and the interactions between the different characters, I find interesting.

--Can you live doing art in Denmark?

--Only very few people can do that in Denmark. I also have a part-time job as a social worker.

--Is there State funding for the arts? And it is easy to get?

--Yes, for this residency the Danish Arts Foundation supports me. I graduated from Funen Art Academy in 2007 and have been out there long enough for them to pay attention to what I am doing. And then the more you apply the more you get more experience with writing applications. In general we have a good funding system for the arts, which generates many layers of activity and leads to great variety in Denmark.

--What do you think about the art you have seen here?

--Well, I have been to most of the mayor art museums but I think there is a lot more to see by discovering the artist run spaces and initiatives, and that’s more difficult to find as an outsider. But the longer you are here the more you get to know your way around and you hear about different events. A short time ago I was invited to a concert at someone’s home! Things like that rarely happen in Denmark. It takes time to figure out the system of doing things here. I've been here one and a half months, and I still have much more to explore and I feel I’ve just started… 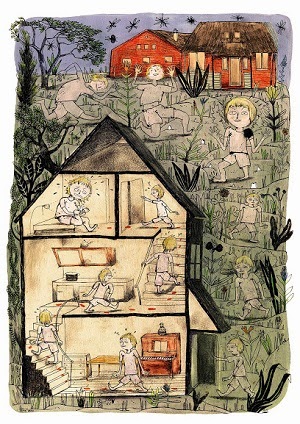 (b. 1976) is an interdisciplinary artist, who lives and works in Copenhagen (DK). In 2007, she graduated from Funen Art Academy (DK) and California College of Arts (US). She has exhibited her works in various contexts in Europe and the United States such as The Turku Biennial 2013 (FI), Den Frie Centre of Contemporary Art in Copenhagen (DK), The Art Laboratory Berlin (DE), Cultural Center CK in Skopje (MK), and the Lab in San Francisco (US). Besides that, she has produced a number of public artworks, such as a giant ‘welcoming’ light sculpture in the desert near Bledsoe, Texas (US), a social sculpture in the form of a memorial bench near the Factory of Art and Design, Copenhagen (DK) and a historical town gate for a thoroughfare in the heterogeneous neighborhood of Ålekistevej in Vanløse (DK). Recent awards include working grants from The Danish Arts Foundation (2012-2013) and winner of the Turku Biennial 2013 (FI).


Besides her individual practice, Heidi has been involved in different curatorial projects. She co-curated, along with Jens Axel Beck (DK) the award-winning exhibition, Local Global Plan in the public space of Vanløse (DK) in 2010 and since 2007, she is co-curating the international Deadpan Exchange series with Jonn Herschend (US). Additionally, she is the co-founder of two artist initiatives in Copenhagen (DK); Koh-i-noor (since 2004) and Sydhavn Station (since 2012).


Posted by Hopkins Theatre in English at 18:20